(Oncorhynchus kisutch)

Home 9 Resources 9 Coho Salmon
Coho salmon may be confused with either rainbow trout or chinook salmon. Cohos, however, can be distinguished from the others by looking at their mouth and tail. A coho has spots on the upper part of the tail only and has a dark mouth with lightly colored gums. 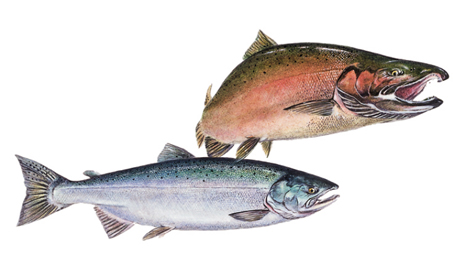 Originally a Pacific coast fish, coho were introduced into the Great Lakes as early as the 1870’s. The most notable interest in stocking cohos started in 1966 when the State of Michigan introduced smolt into lakes Michigan, Huron, and Superior. Ontario first stocked Coho in the spring of 1969 into Lake Ontario, Nipigon Bay, and Lake Superior. Coho are now stocked into all of the Great Lakes. Coho spend most of their lifetime in the open water, then return to freshwater rivers to spawn.

Cohos spawn only once in their lifetime, usually at the age of three. Males are the first to move into the spawning streams, usually between early September and early October in the Great Lakes. Fish return to the same river where they were hatched or stocked. Their sense of smell is thought to be the leading factor in this homing instinct. Lakes Michigan and Superior show evidence of natural reproduction; there is little natural reproduction in the other Great Lakes where these populations are maintained by stocking hatchery reared fish.

Adult coho feed predominately on rainbow smelt and alewife in all of the Great Lakes. In lake-specific cases, coho have been known to feed on sport fish such as perch, chinook and sockeye.

Growth varies between the Great Lakes with Superior having the slowest growing fish. As mentioned previously, the maximum age for a coho is three to four years, at which time they spawn and die. In this short period of time, fish reach lengths of 45 – 61 cm (18-24”) and may reach weights in excess of 20 lbs.

During most of their lifespan, coho are following the schools of alewife and smelt throughout the main basin of the lake. Trolling during this part of their life is standard practice. Spoons, in a wide variety of colors, are the most popular baits. Color preferences vary across their distribution and are usually dominated in local areas by a specific “hot” color that changes throughout the season and is rarely the same as the previous year. River anglers can get in on the fall action when the fish return to spawn. Spoons and spinners are effective baits, but float fishing is the most popular. Roe or worms are the most popular live baits.